Cortex not properly reading timecode from some GoPro footage

Where does GoPro fit into this discussion? It seems to run TOD TC, and this shows up in our NLEs and Grading system as properly stamped TC, but Cortex doesn’t read it as real timecode and the resulting transcodes are assigned the Audio TC. When it’s time for conform, we have no way to traceback to the original GoPro files. How are others dealing with this?

@runningman For clips without real TC (like GoPro), we default to TOD. It’s not technically reading off the audio file, it’s just a coincidence those are probably using TOD as well.

In general, for “weird” files like that, we recommend creating a mezzanine or “dailies master” deliverable for use in conform so the TCs harmonize.

Dailies are just the beginning of your post workflow that will ultimately include offline editorial, assembly of the original camera masters, and color correction before final delivery. Depending on the system chosen to be used for Assembly and your requirements, there may be formats that are unnecessarily difficult to deal with at that stage in the workflow. For instance, if your production is primarily shooting ARRI Alexa and recording ProRes, the online editor is likely to be relinking …

By Audio TC I mean the production audio. The resulting transcoded file now has the Video TC stamped the same as the Audio TC, and not the original TOD TC. I would need to load the GoPro again to see what Cortex reports in the TC field, but my recollection is that it sees the same TOD that the edit system/grading system reads. And if this is true, why strip off the TOD from the Video TC?

I was making a guess/assumption that production audio was using TOD, so it’s just a coincidence.

I just ran a test where I synced audio with definitely different TC to a GoPro file and both the resulting dnx and prores proxy files properly took on the TOD TC (from video), not the audio TC.

Is it possible you or someone else manually edited the timecode when processing the dailies?

Is it possible you or someone else manually edited the timecode when processing the dailies?

No. Is it possible this is new behavior for Cortex? The dailies for this were started in the summer, and I’m not entirely sure with which version of Cortex.

No version of Cortex would assign the audio TC to the picture TC of the output, unless you tag the clip as Wild Track (which I’m sure isn’t the case here).

It’s really hard to imagine what the issue could be other than a bug or something else like what Amy mentioned.

Best thing to do at this point when you have a chance is to see whether Cortex properly reads the timecode from those files now.

Best thing to do at this point when you have a chance is to see whether Cortex properly reads the timecode from those files now.

I’ll put one of the offending clips into Cortex and report back. What I do know is that so far every GoPro shot brought into Avid has GoPro Picture and production audio. When I look at the TC for all 9 tracks, they are all the same. When I AMA the GoPro shot into Avid, or import it into NuCoda the GoPro TC is different.

It’s not the Audio TC - that was a bad assumption on my part. Best I can tell it’s using the creation date timestamp as TC which is also very close to the Audio TC. David, this rings a bell with what we spoke about last fall when we were dealing with this same issue on the first season of this show, and the idea of mezzanine outputs was brought to my attention.

Then I guess what I don’t understand is what is Avid and NuCoda reading that Cortex isn’t?

Yep, that’s what we currently fall back on when we can’t read any TC in the metadata. That will be changing in the future, but doesn’t answer the question at hand:

what is Avid and NuCoda reading that Cortex isn’t?

Good question. I’m kind of surprised this is the case. I think we need to get our hands on one of those files. If you can provide an example and also let us know what timecode those other apps are reading, I’m sure @amy and @peter can help take a closer look.

Are these .mov or .mp4 files or something else? And which version are you currently running?

Here is an Avid bin with AMA GoPro, transcoded clip from Cortex, and the finder level timestamp. These are MP4 files and we’re running Avid v.7.0.4. 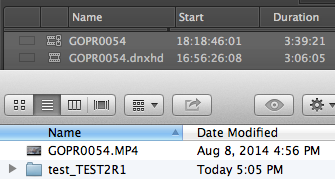 Thanks. What version of Cortex are you running? I think we added the ability to parse timecodes out of some .mp4 files not long ago, but it’s not too straightforward.

A single no-roll file will work if you can share anything. If not, I’m sure we can did something up here. It may just take a little bit.

We are using file creation time for timecode in GoPro files. We did somewhat recently add code to parse timecode out of the H.264 bitstream for XDCAM EX files. I’m pretty sure the same thing does not apply here.

Was anything discovered that I could apply to my current show? Is there nothing consistent about the offset?

Most GoPro files don’t have timecode, thus the whole 00/TOD TC debate/workaround. But these ones DO have a TC track, we suspect it may be created by that GoPro app you mentioned (on a Mac). It’s the first time we’ve seen such an animal, so we just had to go in and figure out how to extract the TC track into usable TC.

Is it possible the mystery TC track has something to do with Gopro protune and how it adds the 24 frame TC, are the files 24 FPS?

It is not being created in the GoPro app - we only downloaded that to see if there was additional MetaData we could flag to help understand what Cortex wasn’t picking up - ironically couldn’t read this timestamp either. This timecode comes to us from the field and is 24FPS, and for the last 3 shows we’ve done where this was an issue, both Avid and NuCoda have been reading this TC track that Cortex wasn’t. I haven’t tested the new build yet, but thank you for finding this timecode track.