Last week we began getting clips with problems. They seemed to load ok on our system, but if played or scrubbed, the “CORE_CONSISTENCY_CHECK_FAILURE” error would pop up, and the clip would need to be re-rendered. It usually played fine after being re-rendered. The problem seems to be random, and occurs approximately once every 50 edits or so. Is anyone else experiencing this?

We created a brand new session from scratch (no copying of any kind), and for 2 days straight, the problem has disappeared. As a test, we attempted to use the old session, and the problem returned.

What version are you currently running? When you refer to a brand new session, do you mean a new project or a new job? Where do you get the “CORE_CONSISTENCY_CHECK_FAILURE”?

Peter we are still running version 1.5.4-b7952 in a shared database environment with multiple systems rendering.
The “CORE_CONSISTENCY_CHECK_FAILURE” is the error that the avid displays in the source monitor when you attempt to play the DNX36 clip in the Avid.
When he says he created a new session he means that we created a new project and rebuilt all of the deliverables.

OK. Is it possible to get an export of the DNX36 config you made in the old project and the new project? I’m sure they are the same. If you try to open the problem file up in Cortex, does it playback OK?

In 2.0.3, we have updated the version of the Avid Media Toolkit we are using. I’m not sure if it is resolved in that version since this is the first time we have heard of this problem. 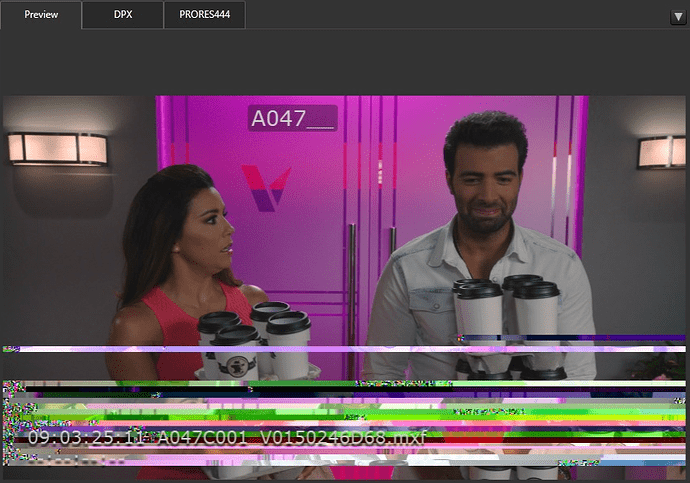 We have 6 systems 2 in each room and this problem just started happening about a week ago in only 1 of the rooms.
As mentioned earlier we have created a new project, I’ve attached copies of the old config along with the new.
The screenshot I sent you is of what the clip looks like when playing it back in the cortex.
The problem appears to be completely random.

There are no differences in the configs that I can see that would cause this issue. Definitely seems to be completely random.

When and if this occurs again is there anything we can send you that will help track this down?

If you could send us the logs that would be helpful.