The sound file for the clip I am trying to sync has a serious timecode mis-match; there was probably a jam-sync issue with the slates because the sound file starts at TC 00:00:00:00 and time-of-day slates indicate a time somewhere around 17:15:XX:XX.

The second shows that I have loaded the correct sound file and have lined up the “play head” to sync the audio with the video. 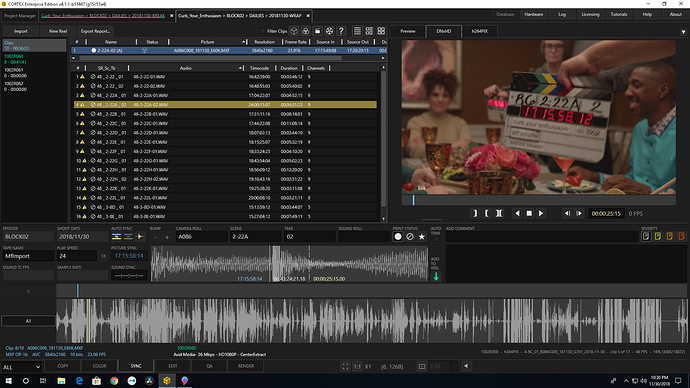 I press the “D” key to sync on this frame and the result is wildly out of sync. 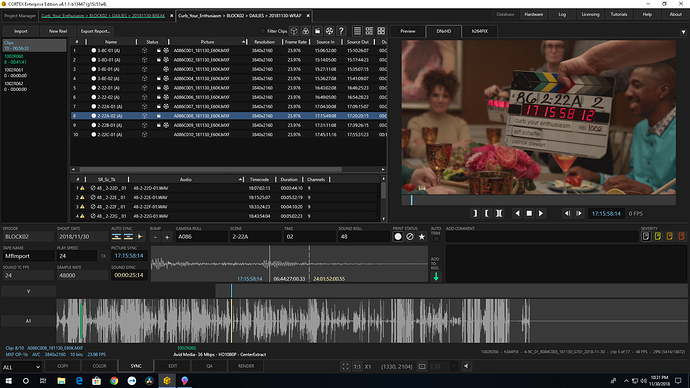 At this point I cannot sync the picture to sound. Please advise a workaround or method to fix?

Charles, did you try

Hi Charles,
It shouldn’t be possible to have a timecode greater than 23:59:59:23. Trying to edit the timecode maybe a good option.

Here’s the strange thing; I did manage to sync the audio and picture in Cortex. I simply pushed the left mouse button hundreds of times to adjust the sync until it was correct.

When the deliverables rendered out, however, the audio was not in sync as it was in Cortex; it was off by a large amount.

So: in sync in Cortex Sync tab, out of sync when rendered.

So, in the future, I should create an audio file submaster? What software would you suggest for altering timecode on a WAV file? I have Audacity (which as far as I can tell strips TC and restarts it at 00:00:00:00 with no other option) and Cortex on my dailies system.

Also, as noted above in reply to Larry, even though I was able to sync the audio and video in Cortex, the deliverables rendered out of sync. I don’t know how to solve that one.

You can edit the timecode in Cortex. The timecode is calculated from a value in the wave file that indicates the number of samples since midnight. This value is likely incorrect in this file. Could you possibly send us this wave file so we could take a look at it?

I’ll talk to the co-producer, but I’m fairly certain this will be a “no”.

EDIT - as expected, it was “no”. However, she says you are absolutely more than welcome to come down and have a look at the file any time here (Lantana in Santa Monica).

You can edit the timecode in Cortex.

The only reference I see to this is on page 60 of the user manual but there is not detail regarding the process. Is it detailed somewhere online as it is not in the user guide?

My primary concern is that if If I alter the timecode in Cortex on the audio clip, how would that match back to the original clip when audio work/conforming is being done? Can the audio clip with new TC be exported as (essentially) a submaster?

Editing the timecode just changes the imported clip in Cortex. It does nothing to the original file. You can create a new broadcast wave file it you like by creating a Broadcast Wave deliverable and adding the clip containing the audio to a reel.

Thanks so much for the info!